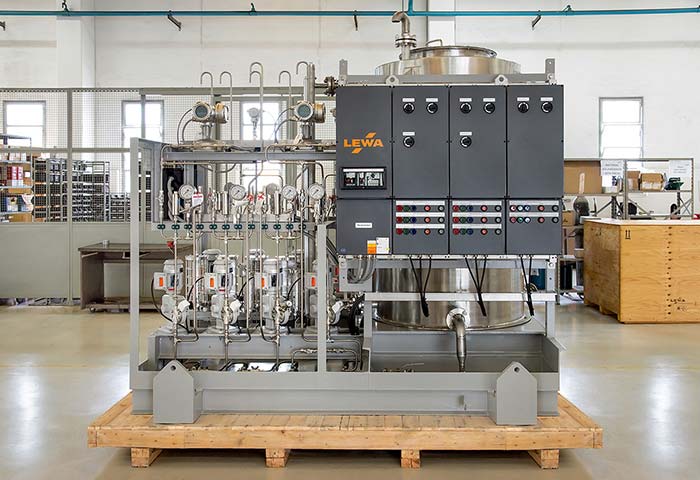 Despite the tight schedule, the company managed to deliver all CIPs two weeks before the deadline.

In 2018, the Brazilian government tightened the regulations for the proportion of oil and grease residue in production-related waste water on oil platforms. Therefore, an international energy company was looking for a way to reduce the share in its production facilities. 19 Chemical Injection Packages (CIPs) were necessary to ensure the daily value of TOG (total oil and grease), which must not exceed 29 mg.  These CIPs can be used to extract unwanted fat and oil from the water and keep the TOG value low.

After the order in March 2019, decisions had to be made quickly regarding production processes and supply chains because the CIPs had to be delivered seven months later. Rodrigo Saad, Sales Manager LEWA Nikkiso Brasil Equipamentos Ltda. explains: "Tight time management and consultation with our partners were essential to meet the deadline and the highest quality standards."

A major challenge in meeting the time frame was the need for high-precision measuring instruments which are not built in Brazil. The delivery of these components took up almost 80 percent of the time frame, leaving little room for planning, assembly and functional testing of the CIPs. In addition, some of the CIPs had to be delivered in very small modules, as the existing skids and pipes on the platforms could not be dismantled. In order to test the CIPs, LEWA had to carry out the assembly for testing in their factory, and after internal approval disassemble it again to meet the required measurements for sending it to the customer. On top of that was the requirement of very extensive technical documentation of the systems, which was necessary due to the customer’s in-house standards: In total, more than 1000 documentations were created.

LEWA's experience in the of oil and gas idustry helped shortening processes. "Through daily process monitoring and thanks to the enormous punctuality of our suppliers, we were able to beat the required deadline by two weeks in the end", says Saad. A total of 140 pumps, 140 electric motors and 140 safety valves were installed in the CIPs within 7 months.