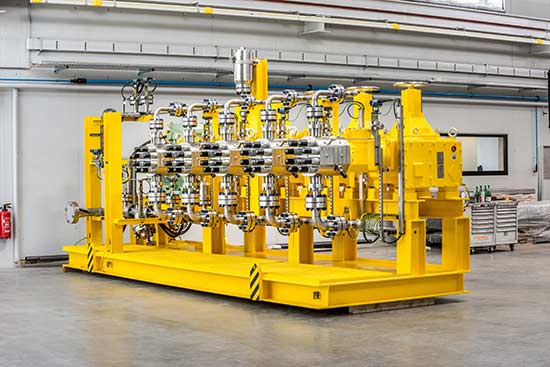 Eight additional diaphragm pumps in boxer design and 12 process pumps have been ordered to increase the gas production on a Persian offshore platform by 56 million m³ per day.

As early as 2013, a total of 40 process diaphragm pumps were delivered to two large offshore platforms on the Persian Gulf for the purpose of pumping approx. 70 million m³ of natural gas per day and producing about 50 million m³ of gas that is ready for sale. The order, worth around 30 million euros, was the largest in the history of Lewa GmbH at the time–and then the follow-up order was placed in the summer of 2017: A total of eight LGB2 Boxer pumps and 12 LDH5 series process pumps have been ordered for transferring monoethylene glycol (MEG) from the Tie In Platforms (TP) to the Well Head Platforms (WHP) and on-site MEG injection. This injection is intended to prevent the ice formation in the drill hole that can occur during the formation of methane hydrate.

The plant, which was built in 2013 and has been the largest of its kind in Saudi Arabia ever since, has now been expanded to handle having its daily gas flow of 70 million m³ increased by another 56 million m³. "A fundamental goal of the client is to gradually convert the energy utilities of the country from crude oil to gas in order to make more crude oil available for the global market", explains Klaus Figgle, Engineering Project Manager at LEWA. "This solution, developed specifically for the application, was completed smoothly by all parties involved and delivered on time," Figgle says to summarize. "On the whole, all sides have been very pleased with the project. It will be handed over to the client in 2019."