System operators fear cavitation in pumps because it not only reduces the net efficiency of the hydraulics, but can also cause major damage to the pump units and direct peripherals. This can occur in a large number of pump types. Plant operators can avoid cavitation by making sure that the temperature of the pumping medium is not too high or the suction pressure is not too low while pumping. But what if cavitation still occurs? It’s complicated to assess, especially during an ongoing operation.

Assess and avoid cavitation: system assists pumps in the process

Yokogawa has developed a detection system to easily prevent cavitation without the need for complicated assessments by the plant operator. This system detects cavitation, collects information during operation, and warns of imminent dangers in real time. In this way, the system can help to identify operating conditions that reduce performance at an early stage. Damages can also be detected early on, or even be prevented beforehand. This makes not only the operation but also the maintenance of the system easier. The supplier’s real-time cavitation detection system has been available on the market since the end of January 2019.

What contributed to its development is the awareness of the fact that cavitation is difficult to detect because it takes place inside the pump, where visual inspection is not possible. Even experienced experts can overlook the first signs of trouble. The prevention system therefore takes advantage of the relationship between differential pressure and cavitation. The result is a condition-monitoring solution used to measure and thus quantify cavitation on the basis of pressure data.

Specifically, the real-time detection system comprises following components: a network-based control system, cavitation detection software, and a differential pressure transmitter. The components are developed and produced by the supplier. Connection to the fieldbus and the control system is via FOUNDATION™ Fieldbus. 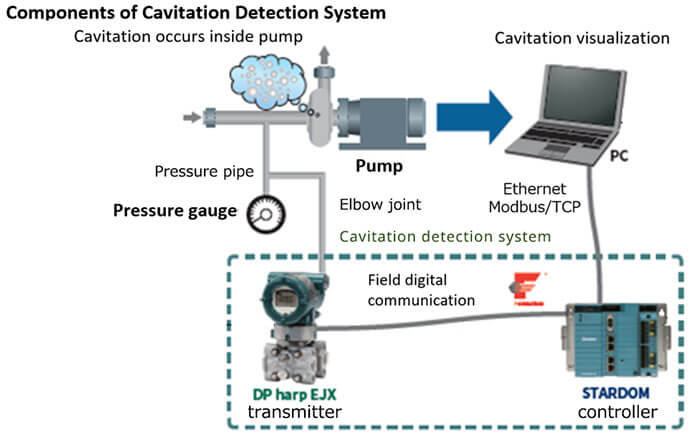 Pump and other hydraulic components are monitored

Cavitation can have an effect not only on pumps, but also on valves and other parts of the system. Possible causes range from the opening or closing of a valve, a change in the viscosity level, to other properties of the pumped medium. The maintenance system can monitor all potentially affected components to help detect and measure cavitation in time.

Yokogawa’s real-time cavitation detection system can be deployed in all industrial segments that make use of liquid media; these include the chemical and pharmaceutical industry, the food and beverage industry, in pulp and paper production, for water disposal and supply, in the petrochemical industry, the oil industry, and in the production of iron and steel.