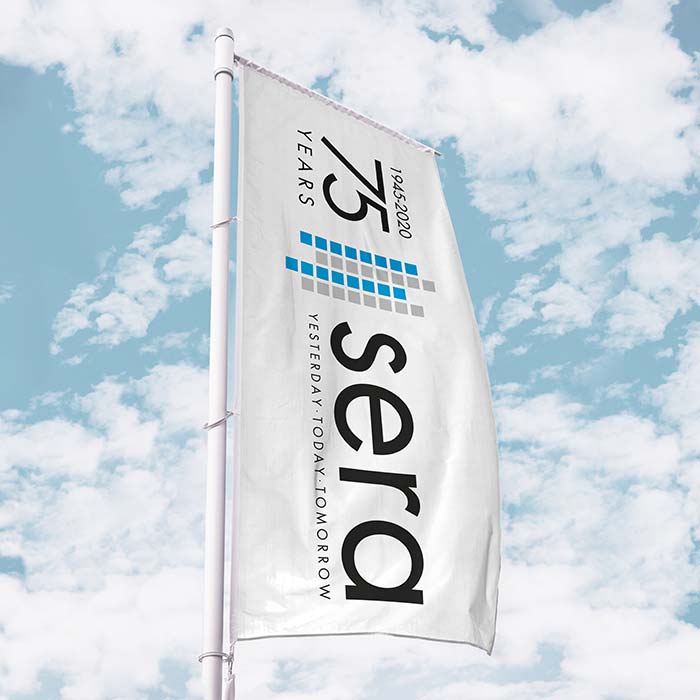 Millions of people all over the world have relied on the high quality and reliability of sera products every day for 75 years.

As one of the world's leading German companies in the fields of liquid dosing technology for disinfection, water treatment and conditioning as well as hydrogen and compressor technology, sera provides efficient application solutions that are optimally adapted to customer requirements where safe and exact dosing, conveying and compression of liquids and gases are important.

Immediately after the war, at the end of May 1945, the founders Reinhold Seybert and Hubert Rahier laid the foundation stone for a family business, which today operates worldwide.

Initially, the founders produced everything that people needed most urgently after the past years of war: ladles, pans and smoking cabinets. Due to the increasing demand for products for pump technology and accessories for chemical products in post-war Germany, the product portfolio was expanded and quickly developed, so that the first dosing pump was produced as early as 1948 and the world's first double diaphragm dosing pump was patented in 1950. At the end of the 1950s, compressor technology was added as a further business area. In 1958 the patent for the first metal diaphragm compressor was filed.
Right from the start, the company has been working internationally. As early as 1952 the first trading partnerships were established in Holland, Denmark and Austria.

In the following years, the products of the metering and compressor technology were further developed, the range of products was extended and the international sales network was further expanded. After Hubert Rahier, his son Helmut took over the management of the company together with Reinhold Seybert in 1976 until father Hubert retired in 1980 and the last company founder Reinhold Seybert retired in 1985. Under the management of Helmut Rahier, the company continued to develop at the location in the following years. In 1989, the administration building was first extended and the former company logo was replaced by a new logo design. Since then, the "sera" brand has been protected worldwide and its branding has been promoted. In 1994, the company premises were considerably enlarged so that the production capacities could be more than doubled due to an extension in the following year 1995 on the occasion of the 50th anniversary. In the same year, the founding family Rahier took over the remaining shares of the other founding family Seybert.

With the turn of the millennium the next generation change began. When Carsten Rahier joined the family business sera in the third generation, the traditionally and down-to-earth managed company faced the challenges of change and modernization. The sales structures had to be improved, innovative strength had to be established, the internationalization had to be pushed forward and the generational change had to be mastered at the location. After five joint years of management, Carsten Rahier took over the sole management of the family business after the death of his father-in-law Helmut Rahier in 2005.
Under the leadership of the now 52-year-old, the company has since been comprehensively modernized and internationally oriented. The medium-sized group of companies now has subsidiaries in Great Britain, South Africa, Spain, Austria and Switzerland.

"Satisfying customers worldwide on a daily basis and inspiring them with innovative products and services, while continuously developing and improving the company internationally, are essential factors for the success of the company. Achieving this while at the same time not forgetting the roots and tradition of a long-standing family business is always a challenge for us", says Carsten Rahier, managing partner of the sera Group, "we try to become a little better every day".

Today the sera Group is positioned internationally as an innovative environmental technology company. Customers from all over the world appreciate the reliable products from North Hesse.

The dosing technology division operates under the subsidiary sera ProDos GmbH and produces, among other things, system solutions and systems for drinking water and waste water treatment, for mixing and dosing chemicals and dosing disinfectants in sectors such as breweries, the food and beverage industry. But there is also a wide range of other applications, such as in the textile, chemical or pharmaceutical industry. sera is therefore one of the leading companies worldwide in this area.

Likewise, the field of compressor technology (today hydrogen technology) has developed into a highly innovative business area. sera Hydrogen GmbH is mainly concerned with the use of hydrogen as storage for renewable energies. sera is the only provider worldwide to offer a complete technology spectrum for solutions in the area of compression in addition to modular hydrogen filling stations and systems for power-to-gas applications. To implement "hydrogen as energy of the future" is one of the long-term goals of the company.

In addition to its economic activities, sera feels closely connected to the location North Hesse and the region. Social commitment is therefore a major concern of the family-owned company, which is reflected in the diverse support of sports, culture and social projects.

This is also expressed in an open and modern company culture. Because "New Work" is written in capital letters at sera. In addition to the trust-based working hours and a corporate culture based on people being on first-name terms that has been successfully lived for years, the company offers its employees ("seraner") extensive social benefits, a wide range of sports offers "...be sera, be fit" up to health management "...be sera, be healthy", daily fresh catering, free fruit and drinking water and much more. In addition, sera also attaches great importance to diversity and openness among each other as well as transparency regarding the company figures and processes. In this way, all "seraner" are involved in the decision-making processes and events in the company.

Even and especially in times of crisis, sera assumes social responsibility independent of its own concerns and challenges. In cooperation with the local retail trade, sera trainees offer a shopping aid for risk groups and people in quarantine during the Corona Pandemic. In addition, a plant for disinfecting the company pipeline network was converted at short notice in order to produce the disinfectant urgently required in the region.

"In this way we want to make our contribution to maintaining and improving infection protection and to helping the people on site directly and quickly. Especially as a family business with regional roots, we want to live up to our responsibility. We do this true to our company motto: We create added value for people and the environment," emphasizes Carsten Rahier.

sera is proud of what has been achieved and is ready for the future, which sera wants to actively shape as a modern environmental technology company.

The company celebrated its official 75th anniversary on 28 May 2020. This would be a reason to celebrate. Under the motto "Yesterday - Today - Tomorrow" sera wanted to celebrate its anniversary in a fitting manner starting this June. Due to the current situation and the uncertainty of how the Corona Pandemic will develop, sera decided to postpone the actions and celebrations until next year. The company is doing this for reasons of prevention and respect for the many victims and people in need worldwide. sera is confident that in spring next year they will be able to hold their celebrations in the then modernized Plant 1 at the main site in Immenhausen in time for the 75th anniversary year.

Until then, sera invites you to visit its anniversary website and to immerse yourself in its exciting history full of innovative product developments. It shows how and where the sera Group operates today as an international group of companies and gives an outlook into the future that the environmental technology company wants to actively shape.