The major research facility CERN operates the world's biggest Large Hadron Collider (LHC). To obtain accurate measurements, silicon detectors are mounted close to the interaction point at all experiments. Carbon dioxide cooling systems temper the innermost layers of the detectors to temperatures of up to -40 °C. For this application, LEWA diaphragm pumps have been used since 2007. They ensure the smooth and consistent flow and guarantee trouble-free operation.

Two other systems have been controlling the temperature of the IBL subdetector in the TALS experiment since the beginning of 2015. For the upgrade of the CMS pixel detector, a new CO2 cooling system was built with a LEWA remote head metering pump and put into operation. Unlike standard pumps, they process the highly compressed carbon dioxide without heat input.

The cooling system, which contains the LEWA diaphragm pumps, is used in the Large Hadron Collider beauty (LHCb) experiment. The aim of this experiment is to answer the question of why the universe is comprised primarily of matter and not anti-matter. One of the things researchers will look at is the B meson, which the scientists obtain by accelerating protons to near the speed of light and induce them into collision. To achieve the highest possible precision, the LHCb detector system must be under vacuum. Furthermore, to prevent severe radiation damage on silicon sensors, two carbon dioxide loops cool each half of the detector to about -25 °C.  It is known that operation at temperatures well below 0 °C greatly mitigates these damaging radiation effects. No oil can be tolerated in the detector cooling circuit, because oil can start to solidify under the influence of radiation and may cause a blockage in the thin cooling lines. 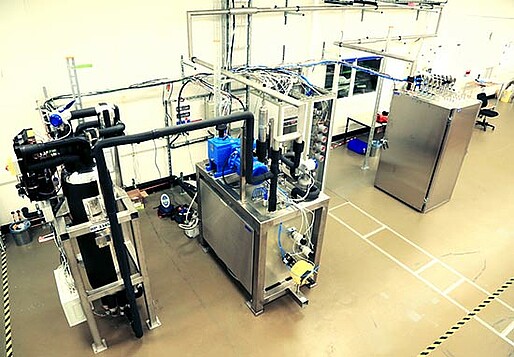 CERN relies on diaphragm metering pumps from LEWA because the LEWA solution for CO2 cooling works without oil. For CO2 a compression cycle is not possible because no such oil-free compressor is available on the market. LEWA pumps deliver an absolutely uniform flow which is necessary for a continuous and constant, two-phase cooling. The transition of the CO2 from the liquid in the gaseous state is used in order to dissipate heat. An important advantage of CO2 cooling: Due to the compression, the volume of the vaporized CO2 is very low, and tubes with a very small diameter of only two millimeters tubes can be used. In another CO2 cooling system installed in 2016, LEWA diaphragm metering pumps in remote head design with a cooling jacket are in use.