Well dosed is half brewed

The Danish Carlsberg Group is the fourth largest brewery group in the world. In 75 breweries in Eastern and Western Europe, as well as in Asia, Carlsberg produces more than 500 different beers. Like many breweries and suppliers of the beverage industry, Carlsberg also relies on the expertise of sera when it comes to the exact dosing of liquids.

In Eastern Europe "Baltika" is the most successful brand. Just in time for the 50th anniversary of Carlsberg Azerbaijan, the introduction of the non-alcoholic brand "Baltika 0 Grapefruit" was planned. For this purpose, Carlsberg needed a tailor-made system that on the one hand always prepares the grapefruit flavor in the same proportion and on the other hand ensures the exact dosage of the aroma in the process. sera has developed and built a customer-specific dosing system that meets exactly these requirements. Equipped with externally controlled diaphragm valves, an agitator, a radar level measurement and a sera multi-layer diaphragm pump RF410.2-500ML, the system operates fully automatically and is designed for operation at high temperatures. 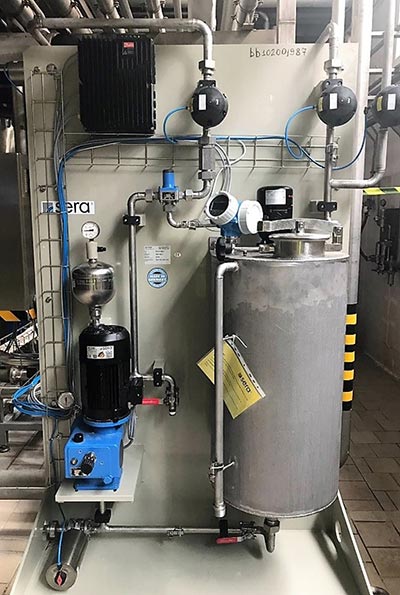 By using the multi-layer diaphragm, safety-relevant dosing tasks can be realized. The increased safety requirements are taken into account by - compared to single-layer membranes - significantly improved diaphragm service life and membrane monitoring.

If the working diaphragm is damaged, the concept of multi-layer diaphragm technology with the standard pressure-controlled diaphragm monitoring ensures absolute leakproof operation. The damage to the working diaphragm does not result in a direct failure of the dosing pump. The pump can be operated for a limited time, resulting in increased reliability. With a flow rate of up to 500 l / h and a maximum pressure of 10 bar, RF410.2-500ML is the ideal pump for dosing tasks in the Carlsberg brewery in Azerbaijan.