Andreas Wahl from KAMAT in Germany outlines the benefits of using fewer, but more powerful plunger pumps in pump plants for hydraulics in high production longwalls.

Longwall mining operations rely on high pressure pumps to deliver the hydraulic power needed to support and advance the face. As these mines extend the length and height of faces, the flows that must be maintained only increases. At the same time, autonomous operations push the mining system to move the shields more quickly. This responsiveness further increases the demand on hydraulic systems. In today’s high production longwalls, the increasing lengths of longwalls, the support forces associated with the cylinder diameters growing, the higher hydraulic pressures and the speed of the extraction machines all place high demands on the hydraulic supply. Hydraulic plants have to supply the volume flow of the hydraulic emulsion at the required pressure. 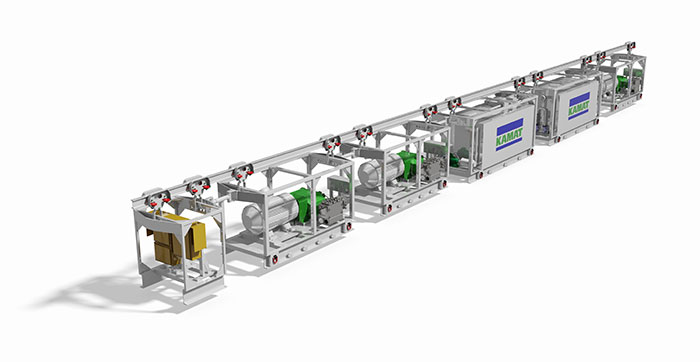 In longwall hydraulics, plunger pumps are generally used. While in the 1950s, the used hydraulic pressure for the individual props was approximately 150 bar. 40 years ago it was approximately 200 bar, and around 1990, system pressure was roughly 300 bar. The limiting factors for higher system pressures were mainly sealing issues of cylinders and controls. Since then, the length of the longwalls has grown continuously, system pressures increased on one hand and on the other hand, bigger cylinder diameters of the supporting cylinders are being used in the shields. So, the hydraulic plant has to provide a big flow of hydraulic fluid at a defined, high system pressure.

Nowadays, HFA emulsions with a water content of 95 - 97% are used. Thus, the application is called water hydraulics; modern emulsions are called micro-emulsions and are an almost clear liquid. Modern hydraulic pump plants for high output longwalls have to provide in the range of 2000 l/min. emulsion at a system pressure of 350 - 420 bar. They have to do this reliably and at a high availability as a loss of the hydraulic supply results in a standstill of the longwall and thus the loss of production. In addition to the high flow of emulsion at a system pressure of 350 - 420 bar, more and more water is used for dust suppression purposes. Water spraying nozzles are integrated into the roof support and shearer drums with the result that the pump plant only easily exceeds 2 MW of installed electrical power for high output longwalls.

Until a few years ago, the typical emulsion pump was a plunger pump with an input power of 90 kW, followed by 130 kW pump. Following the aforementioned increasing flow demands in high output longwalls, the pumps grew to 250 kW and then to 350 kW power input. As longwall hydraulic pump systems are equipped with an arrangement of a number of pumps – typically three or four pumps – depending on the total flow required.

Modern high production longwalls with fast cutting shearers need increasingly large flows of longwall fluid. Previously, this has been achieved by adding more and more small or mid-sized pumps. As a result of increasingly complex pump plants, disadvantages for operational reliability were brought about. The solution for modern pump systems of high production longwalls with big flow demands is therefore to use bigger pumps, which result in a less complex pumping system.

Modern longwall hydraulic pump plants are becoming more and more equipped with one to three pumps. Choosing big pumps of 500 kW input power per pump – already used today in high production longwalls – makes it possible to get rid of the otherwise needed suction booster pumps. This means that the plant is simplified, which logically results in lower probability of failure, less service, less maintenance and so on.
Using big pumps leads to much simpler installations, which reduces the associated number of hydraulic and electric components of the pump system. Even if pumps of big input power are used, the dimensions remain reasonable and allow underground transport. Even systems designed for using 1000 kW pumps have a maximum width of 1600 mm. The size of the unloader valves used is adapted to the big flows.

Seeing the advantages of the use of bigger pumps when the flow demands increase, KAMAT has started to drive the development by re-engineering its range of 80 - 400 kW three plunger pumps in a first stage. In addition to the modernisation of the existing range of products, the company extended the range of pumps to bigger power inputs with the development of five plunger pumps, maintaining the target of smooth operation but at bigger flows. Two quintuplex pumps rated at 530 kW and 800 kW named K50000M-5G and K80000M-5G are now available. In longwall operations, the K50000M-5G delivers 640 l/min. at 420 bar or 763 l/min. at 360 bar. The K80000M-5G delivers 1185/min. at 420 bar or 1360 l/min. at 375 bar with other flow and pressure ratios available. This means that the longwall can be powered by one or two pumps only.

Hydraulics with bigger pumps equate to a less complex pumping system with less failure probability, less service, less maintenance and consequently, higher efficiency. Big pumps producing big flows increase the demand for flow control. To manage the big flow per pump, the company launched a new range of failsafe smooth acting unloading valves for flows up to 1500 l/min. per pump at 500 bar maximum. Furthermore, the new unloader valves are equipped with inner parts made from solid ceramics and are thus extremely resistant to wear.

The company offers three different sizes of unloaders, developed and manufactured in-house. The three sizes available cover the full range of flow, from the smallest pump sizes to the big 800 kW units. Using frequency-controlled motors leads to a perfect adjustment of the flow produced by the pump to the demand of the longwall. The company’s installations throughout the world show that driving a longwall pump with a variable speed drive (VSD) significantly reduces service necessity and increases availability impressively. KAMAT plants for the mining industry with frequency control are in operation since 2002, when the first VSD-controlled underground pump plant in the world was commissioned at a mine in the Saarland area in Germany. Other pump plant locations with VSD technology are in operation include China, the US and Russia.

The VSD eliminates pressure shocks by adjusting the pumps' drive speed to the flow demand of the longwall without the need for the unloader valve to switch. This reduces wear in all parts of the longwall system downstream the pump system. In periods of high demand, the pump operates at full speed and flow. If the demand is dropping, the speed of the pump is slowed down and adjusted to the flow need of the face. Simultaneously, the energy consumption of the motor, driving the pump is variable.

Another advantage of the VSD is the improved energy efficiency. The company’s pumps can run at 10% nominal speed (10% nominal flow). This reduces load cycles when the longwall is idling or running slow. Running a K50055-5G to supply a face at the typical 320 bar with a variable speed driven motor thus allows a flow spread of 640 l/min. flow at full speed down to 64 l/min. without the need to switch the unloader valve, and without the need for a booster pump.

When the longwall face needs 120%, the system allows one pump to run at full capacity while another runs at 20%. Comparatively, other systems use two pumps running at 60%, which means they would need to use two VSDs, increasing investment costs significantly. It is a fact that those modern pump plant systems with as few pumps as possible, without booster pumps and equipped with frequency converter are verifiable highly energy efficient.

The energy consumption of the pump and the system is minimised as the idling of the pump at full speed, returning fluid into the tank, is avoided. The VSD-controlled pump is operating efficiently and the pump is exactly providing what the longwall needs. Thus, less electrical energy is wasted for pumps idling at full speed. If slave or standby pumps without VSD are idling they are stopped after a programmable time typically shorter than 10 min.

The energy cost saved during the operation of such a VSD-controlled pump plant should be compared with the cost of the VSD drive. Further cost reduction is achieved by the fact that the prevention of pressure shocks leads to increased lifetime of the components under pressure in the system. Three 800 kW pumps – one each as a master, slave and standby unit, a common constellation – are able to generate even very large volume flows at maximum pressures up to 3500 bar, and thus typical face pressures up to 350 - 380 bar at highly economical rates. 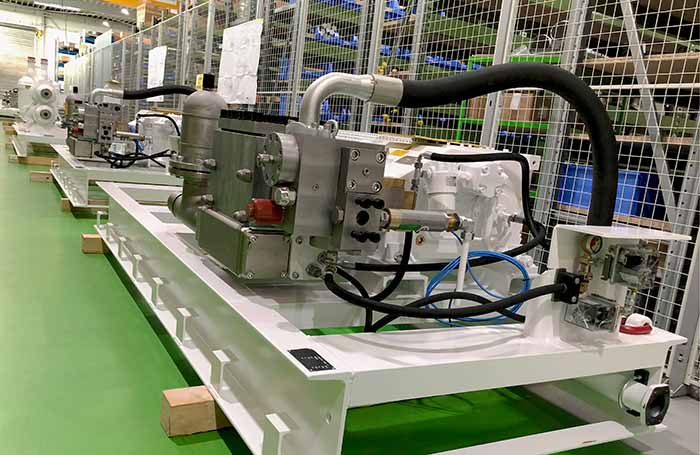