Simulation and optimisation of side channel pumps

Providing high pressure at relatively low flow rates, side channel pumps are often used when choosing between a displacement pump and a centrifugal pump.

Beside the main advantages of an outstanding suction performance and the capability of pumping fluids with high gas loads, the drawback of pumps with such low specific speeds is a quite poor efficiency. In the past, when efficiency was often negligible, this fact was simply accepted. Nowadays, companies are pushed by law to increase the efficiency of their products, e.g. by the Energy Efficiency Directive of the European Union or the Paris Agreement.

As pumps almost require 20% of the world electric power consumption, they offer a huge potential of saving energy. Though many manufacturers have recognized this trend and improved their main models, some exotics like side channel pumps were neglected in the past.

This research project includes a detailed analysis of a typical 1-stage side channel pump with an additional radial suction impeller by means of CFD simulations to find the main losses and show optimization potential. Beside the challenge of increasing the efficiency, it is vital to mention, that the overall dimensions, the head curve and the suction behaviour have to remain identical to guarantee compatibility of the pump as spare part.

In a first step, the model was successively generated and it was obvious, already in a very early stage that it has to contain all details including like suction impeller (360° model), main stage (360° model) as well as the pressure housing and all narrow gaps – see Figure 35 – to provide useful simulation results. Numerical simulations were carried out with the commercial CFD package ANSYS CFX 17.1 in stationary and transient way with scale resolving turbulence models. Mainly structured grids for the impeller, side channel, suction piece and gaps were used. The final model of the existing pump consists of 15 mio. nodes. 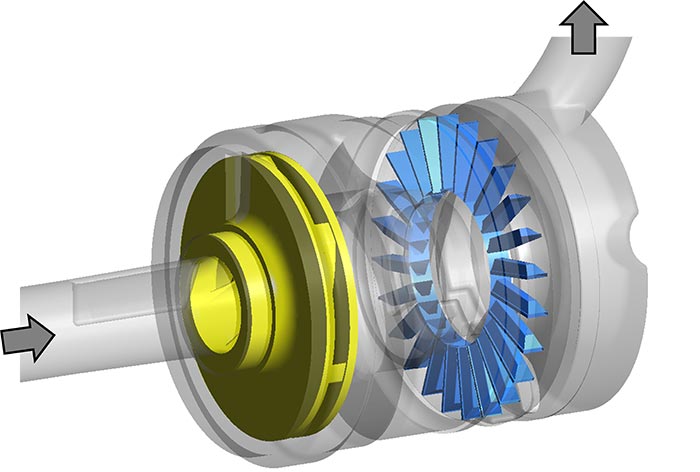 CFD-model of the analysed original side channel pump with radial suction runner (yellow) and impeller (blue).

The CFD-simulations were validated with model tests, and the behaviour of the main components (in stream wise direction) was analysed in detail. Beside loss analyses of the mentioned components, particular attention was paid to the behaviour of the fluid in the inlet and outlet port and the pressure generation in the side channel. 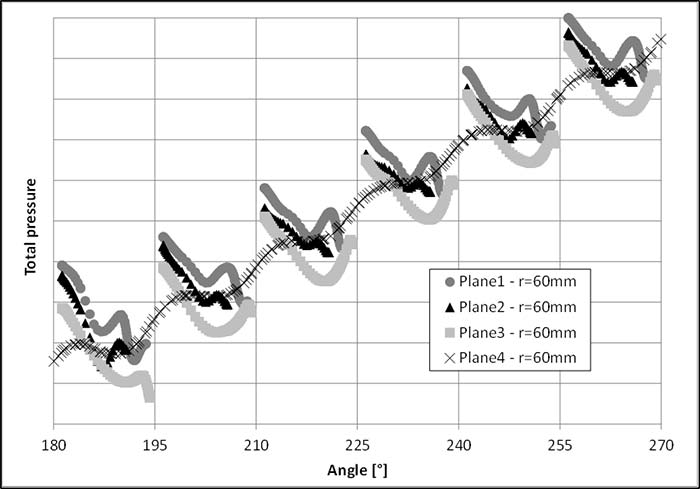 Development of head from inlet port via side channel to outlet port with distribution in each blade channel.

For the optimization process it was necessary to generate a reduced numerical model to analyse the effects of more than 300 geometry variations. After the effects of single and multiple geometry variations were analysed, the findings were combined to establish the desired objectives and validated again with the full numerical model. The numerical simulations predicted a relative efficiency increase at BEP and part load >30% with respect to all given limitations like identical head curve, suction behaviour and dimensions.

Finally, those numerically predicted numbers were validated as the optimized model was manufactured by rapid prototyping and tested on the test rig in the laboratory.

Comparison of original and optimized pump: The excellent accordance between CFD and measurement is shown.