Pump storage on the sea floor as energy reservoir

Contribution of pumps to the success of the energy revolution 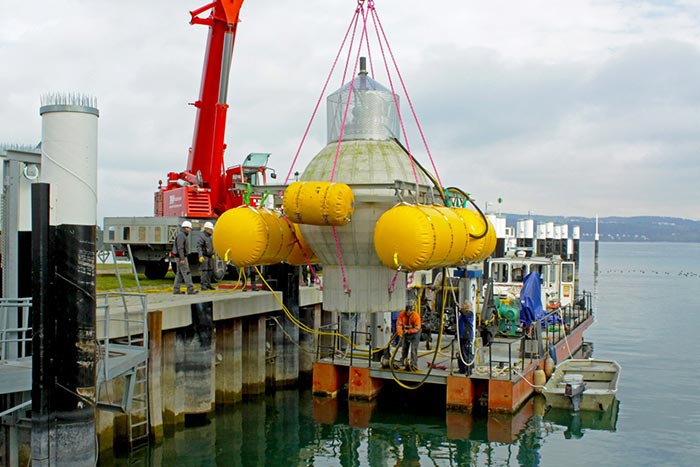 Storage of electrical energy on the sea floor: Pump storage under water could contribute to the energy revolution.
Source: Fraunhofer IEE

When the focus is on the energy revolution, the first talk is almost always of windmills and solar cells. For good reason: Wind and sun are well-suited for covering basic power requirements with regenerative energy sources. But it has long been clear that demand peaks on the one hand and fluctuations in availability on the other will make for problems in the future: In contrast to coal, gas, or atomic power plants, “green” energy sources cannot be adapted at will to the demand.

The solution is storage power stations. Excess energy generated is stored until it is needed: when it's dark or when there’s no wind or if demand increases. Which storage technology is suitable to buffer the enormous quantities of electrical energy that will be required in the course of an extensive energy revolution remains an open question. Power-to-gas is a promising candidate, yet the technologies developed thus far are relatively unsophisticated.

Pump storage plants, by contrast, are already an established form of energy storage. They are in a position to transform large quantities of electrical energy and store it in order to release it on short notice when needed. Pumps are the heart of the system: The electrical energy is stored in the form of potential energy in a reservoir. If energy requirements increase, the water is used to drive turbines, which in turn generate electricity.

The efficiency of already-existing pump storage plants is about 70%; in Germany, several gigawatts of pump storage are already installed. However, expansion is not trivial – for some construction prerequisites have to be fulfilled for the power plants if there isn’t to be any significant encroachment on nature.

Spherical pump storage is a promising alternative. The idea is based on hollow spherical pumps made of concrete, which are installed underwater. Here, it's not just the height difference between two storage systems that is used, but also the difference between the water pressure outside the spherical storage tank and the empty inside of the sphere. Water streaming in drives a turbine for power generation; if there is excess power, the water is pumped out of the sphere back into the sea.

Theoretically, such storage is possible down to a depth of 700 meters and with a diameter of approximately 30 meters. A special benefit arises from the possible proximity to offshore wind parks: The electrical energy that is generated by windmills could be stored this way and called up as appropriate for current demand.

First test in Lake Constance is a success

Scientific experiments assume efficiency of up to 80%. In 2017, tests were conducted in Lake Constance, where a hollow sphere was sunk to a depth of 100 meters – with success according to the Fraunhofer IEE.
The project participants believe there is significant potential in this technology, especially in regions near the coast that have high population densities. If the rechargeable spherical wind power batteries become reality, pumps could become the key to the energy revolution – and ensure available, stable electrical energy for the long run.