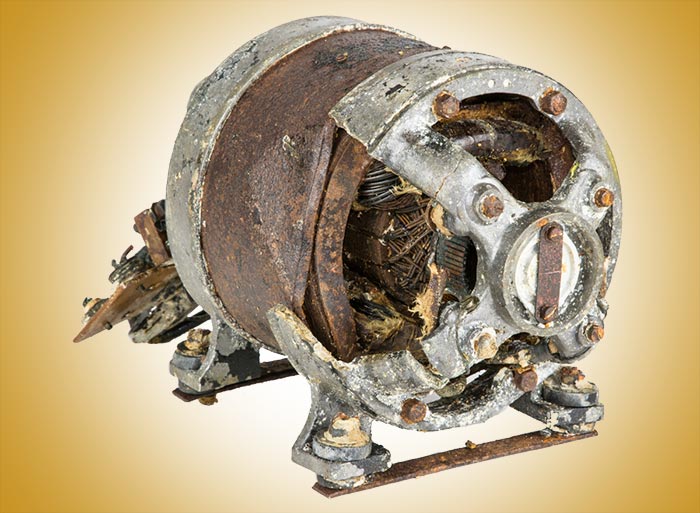 Cavitation has been a problem for plant operators for decades: sight of a historic water pump at the Air Force Museum in Malmslätt (Sweden).

Whether in water supply, wastewater pumping stations or other industrial processes where fluids are conveyed: Cavitation is one of the biggest challenges for plant operators. The phenomenon usually occurs unnoticed, but can cause major damage after just a few weeks. Pumps that are affected by cavitation over a long period of time usually fail without warning - unplanned shutdowns are the consequence, resulting in considerable costs and effort. Other plant components can also be affected, and even the pumped medium can be contaminated by the consequences of cavitation.

Cavitation occurs when the pressure on the inlet side of the pump is too low, for example due to closed valves, a too low filling level or leakages. The pressure drop manifests itself in gas bubbles that form in the flow and implode when the pressure rises again. Enormous forces are at work: up to 20,000 bar of pressure can be released, damaging the impellers of pumps, pipelines, valves and other components of the conveying system.

What initially manifests itself as pitting eventually causes parts of the impeller to break off. If they are small enough, they end up in the conveyed medium.

It is almost impossible to detect the phenomenon at an early stage: Cavitation is manifested by vibrations and corresponding noises. But in hectic everyday operation, the symptoms are almost never noticed, especially in noisy plant environments. Intelligent sensor technology networked with the cloud can help operators detect such anomalies. But often even this automatic detection takes too long to prevent damage early enough.

A new system to prevent cavitation addresses a different issue: ABB, a manufacturer of motors and drive systems, offers a frequency converter specifically for pumping water and wastewater that includes an integrated anti-cavitation function. The operating principle: The inverter detects irregularities in the load profile of the pump. If there are indications of cavitation, the flow rate is reduced by a few percent, with the result that the formation of gas bubbles is reduced. Once the pressure has normalized, the speed is increased again.

The supplier promises that the brief reduction in flow rate has a barely perceptible effect on the performance of the pumping system. The analgesic equipment, on the other hand, is said to benefit noticeably from the function: If cavitation is combated, damage can be reduced and the service life of the pump and other components significantly extended.

Operators can thus increase the service life of their inventory with a one-time investment in a new frequency converter and get the opportunity to effectively improve the operation of the pumping system. Cavitation may still be difficult for operating personnel to detect - but if the system automatically counteracts danger, the potential for damage is significantly reduced and downtime can be permanently avoided.