The difference between conventional system and the EDUR-Multiphase Concept

Typically, liquids need to be enriched with gases, liquid-gas mixtures are to be transported or gassing liquids are to be handled safely. Under such requirements, the known non-selfpriming centrifugal pumps either fail or do not enable safe operation. The failures here are mainly caused by the design of the impeller. As the gas content increases, an increasingly more stable stationary gas area is formed in the area of the impeller hub that finally blocks the impeller inlet and interrupts the transport. The characteristic curve is no longer stable, even at low gas contents. Consequently, such standard pumps are not suitable for meeting the operating conditions. The process automation in particular requires a controlled and trouble-free pump operation.

Lots of applications enable huge and sustainable process improvements. Some of these applications are explained below:

Dissolved air flotation (DAF) is a proven and well recognized procedure for the treatment of water and wastewater as well as for the recovery of recyclables. It serves to simply separate substances that are suspended or emulsified in liquids. With dissolved air flotation, a return flow of the clear water is saturated with air under pressure and then reduced to atmospheric pressure in front of the wastewater tank again. The micro bubbles that become free during the pressure release settle on the suspended materials and float them to the surface of the liquid. From there they are removed by skimming devices.

Typical fields of application include the treatment of oil-water emulsions, fat separations, phosphate and heavy metal precipitations, biological wastewater treatment plants and many more. By the use of EDUR-multiphase pumps, many plant manufacturers report savings both in terms of investment volume and running operating costs which, depending on the type of plant, lie within 30 and 50 per cent compared with conventional plants.

It is historically proven that the flotation technology began with the extraction of raw materials. Most copper mining depends on crude ore that is cracked, grinded in rock crushers and subsequently supplied towards the flotation. Fine air bubbles transport the small mineral particles to the water surface and keep them in the flotate. By means of the water-air mixture and adding of flotation additives at the same time the copper ore is separated from other ores. The ore concentrate is then smelted in the subsequent processes.

Lime Traps in the Paper Industry

In the paper industry calcareous deposits from the circulation water in pipes, cooling systems, heat exchangers, etc. can be prevented using lime traps. As a result, the freshwater demand is significantly reduced and both plant reliability and process sustainability as a whole are improved. In addition, a reduction in repair and maintenance costs of the systems is achieved.

Downstream the fertilizer production process a stripping system is installed to reduce the ammonia nitrogen content and also the chemical oxygen demand (COD) in the wastewater to the standard values. Initially, the wastewater is fed into the tank near ground level. From there it is conducted to the EDUR-multiphase pump where air is handled along with the water and brought into the solution under pressure. After pressure release the generated water-air mixture is led back into the tank via nozzles from above. Due to this special type of sprinkling, ammonia is released in the wastewater. It can be fed back in gaseous state by a gas pipe into the process of fertilizer production again.

Instead of hydro cyclones the separation of an oil-water mixture can also be performed using flotation technology and multiphase pumps. There is generally a significant amount of oil-water mixture when conveying crude oil. Flotation plants equipped with multiphase pumps separate the oil and water. Essentially, methane is used in place of ambient air in order to achieve separation. The extracted oil is further processed and the water is sent back to the drill holes. However, in contrast to industrial applications, the multiphase pumps must be designed as super-duplex pumps for resistance reasons. The shaft sealing is executed according to the so-called API plan (API 682 / ISO 21049).

The advantages are obvious: Supreme process reliability, energy efficiency, the simplification of the plant concept and the associated reduction of plant components that are susceptible to problems and are maintenance-intensive result in a wide acceptance of the innovative EDUR-multiphase concept. Both the immense savings and the significantly lower operating costs compared to the previous plant structure lead to extremely short amortization times. Even the retrofitting of existing plants paid for itself after a short period of time. 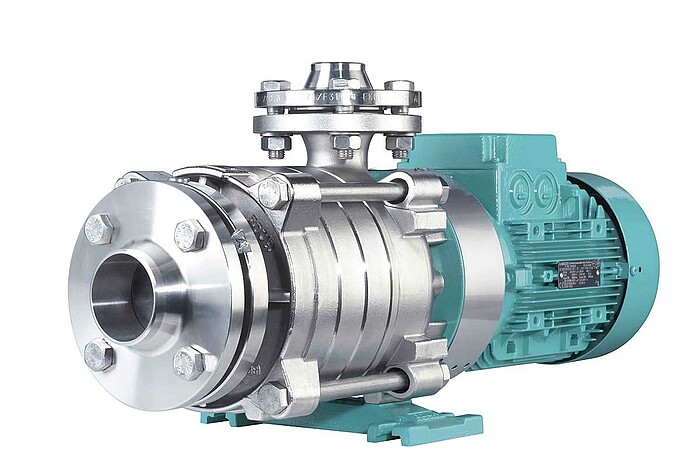