Technology from sera plays an important role in the world's most modern seawater desalination plant in Agadir, Morocco 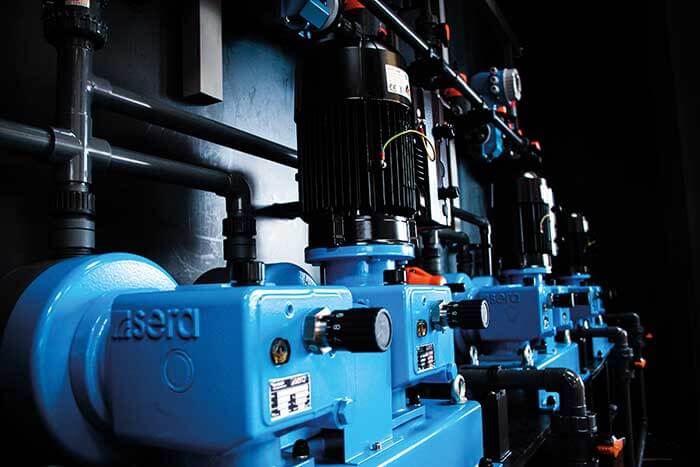 Morocco is an arid country which is badly affected by climate change. Population growth, the progression of industrialisation, the growth of the tourism industry and agriculture have led to the groundwater table sinking continuously in recent years. Large seawater desalination projects for drinking water production are intended to counteract the drinking water scarcity, and sera is contributing to this.

Morocco – the cultural, political and economic link between Europe and Africa – has always been an arid country. Climate change and the increased development of exports of agricultural products have made the situation even more severe in recent years. A programme initiated by the Moroccan government and supported by the EU therefore includes plans to develop and construct seawater desalination plants for producing drinking and irrigation water by 2030. Currently, 30 million cubic metres of seawater and brackish water are processed each year in Morocco at ten plants, and this figure is set to increase to 400 million cubic metres a year by 2030.

The Souss-Massa region in the southwestern part of Morocco is home to more than 2.7 million people in an area comprising approx. 51,600 km². Agriculture is the region’s most important branch of the economy and its capital city, Agadir, is an important fishing and tourist port. Drought and water shortages are very problematic here too and ultimately cost thousands of jobs in agriculture.

In order to counteract the water shortages, a tender was issued for the construction of a seawater desalination plant for the region, intended to cover both the water requirements for domestic use and irrigation requirements for the region. As such, the plant is intended to contribute to developing  the most important branches of the economy, tourism and agriculture, and thus maintaining the groundwater level in the region at its current level. At the start of 2019, the Moroccan Ministry of Agriculture and Economy awarded the construction to the Spanish company Abengoa, which is a leading provider of technology solutions for sustainability in the energy and environmental sector.

Seawater desalination is an energy-intensive process. Abengoa planned to carry out the seawater desalination using reverse osmosis, a process in which the seawater is pressed through semipermeable membranes, which do not let the salt pass through, at high pressure. In comparison with distillation with around ten kilowatt hours per cubic metre of water, only three kilowatt hours are required for this process. It’s still a high level of energy consumption. Therefore, the desalination plant in Agadir is exclusively powered with renewable energies: it gets its electricity from the Noor Ourzazate solar power station, which is approximately 400 km away, and is thus the largest solarpowered seawater desalination plant in the world. An extension and use of wind turbines is planned for the future. The total costs of the project are over EUR 370 million. The region’s farmers have each contributed around EUR 930 Euro in exchange for a price reduction for desalinated water in the future.

Abengoa was aware that sera had already supplied dosing systems for a seawater desalination plant in Salaha in Oman (113,500 m³ drinking water per day) and therefore used the expertise of the Spanish sera branch. The planned plant in Agadir was initially intended to produce 275,000 m³ desalinated water per day in order to subsequently achieve a maximum capacity of 450,000 m³ per day. This makes it the largest seawater desalination plant in Africa and such a large project for sera that the Spanish branch worked on it together with the headquarters in Immenhausen.

The project required a very wide range of dosing and feeding systems which are needed at different process steps in the seawater desalination process. The comprehensive, customised project was managed by the Spanish branch, sera ProDos S.L. All the engineering also took place in Spain, as did the project documentation. The control cabinets for the plants were also designed and built at sera Spain. The dosing systems were ultimately produced and implemented by a German-Spanish sera team at the site in Immenhausen. Working methods were developed in collaboration to allow such a large-scale project to be processed quickly and effectively. In total, 17 systems in 25 PE cabinets had to be built. This kind of scale is very much a challenge for medium-sized companies in terms of production. We had to be clever here to avoid overburdening the limited storage and production space.

After the cabinets had been manufactured from a total of 15 t of technical plastics (PE, PVC, PP and PVDF), they were assembled: in addition to a total of 77 pumps (dosing, fedding and combination pumps), over 900 valves such as line strainers and ball valves, more than 1000 fittings and over 600 m pipe were installed. Three colleagues worked exclusively for several weeks on fitting the sera  cabinets; this did not include supply departments, such as pump construction. The collaborative project, with all its challenges, brought colleagues from Germany and Spain even closer together. After the successful customer acceptance in January 2020, the first 20 cabinets started their long journey via Spain to Agadir by lorry in February and the remaining five cabinets were delivered by the end of 2020. The seawater desalination plant should go into operation in March 2021.

sera in the process of seawater desalination

In order to ensure seamless functionality and the longest possible service life of the seawater desalination plant, sufficient preliminary treatment of the incoming water is essential. sera dosing and conveyor systems are used here. The water is analysed and, depending on its composition/ contamination, various chemicals are added to facilitate reverse osmosis. From chlorine to protect against bacteria and microorganisms and sodium hydroxide to adjust the pH to sulphuric acid for cleaning in place - sera doses the right medium in the right concentration. And this applies not only to preliminary treatment, but also to the important cleaning of the diaphragms.

This means that sera is providing clean water again and creating added value for people and the environment in a state-of-the-art seawater desalination plant with the highest environmental standards.