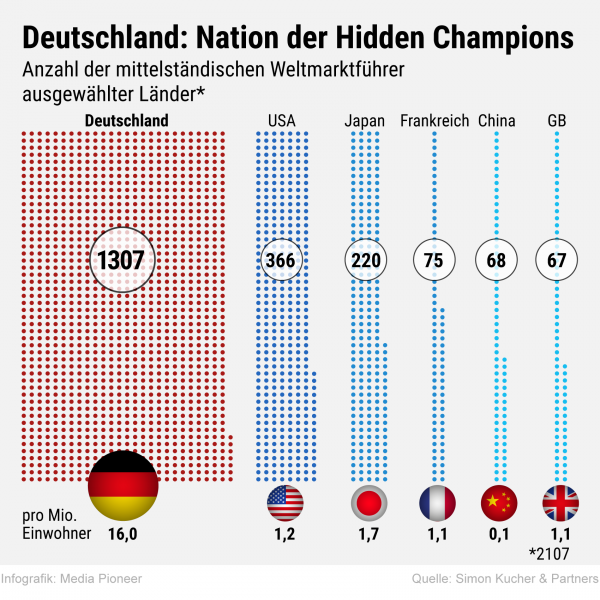 Hermann Simon invented and defined the term “hidden champions” for German family businesses. He uses this term to refer to companies that are among the top three in the world market, but have a sales volume of less than five billion euros and are little known to the general public. He has identified around 3,000 companies in this category in the world, of which more than a third (approximately 1,307) are based in Germany (see chart). Germany owes its prosperity and economic stability to these companies, he says. Professor Simon summarizes his findings as follows:

"I have been hearing the whining and complaining about Germany as a business location for 40 years now, but we have become an increasingly better place for business over the years, not worse."

"We are by far the largest exporter per capita—twice as strong as France, Italy, and Great Britain, and I don't see any reason why that should change."

"98 percent of world markets are small markets, and we Germans are incredibly strong in these markets. Ever since I began my observations of market developments, this strength has continued to grow instead of diminishing."

Conclusion: German problems are real, but they are compensated by German strengths. The situation is better than the business mood—and that should spur us on rather than putting us at ease.