Salt is still one of the most valuable commodities, but there is a major problem involved in its production: during rock salt production in particular, sodium chloride quickly accumulates in the collecting tanks, along with sand and other degrading materials. It is not just that the aggressive substance contains pollutants, it also encourages metal corrosion in the production plants.

As a result, one of the largest salt producers in the world continually needed to bring in a cleaning company with vacuum tankers to spend several weeks removing sludge from the tanks.

Cleaning using this method took an average of 14 days and cost around 10,000 euros each time. A TORNADO® rotary lobe pump made by NETZSCH has since been used to reduce the effort and costs involved. The self-priming equipment can easily be moved between the tanks with a forklift and its continuous output reduces the suction time from two weeks to around five days.

About 100 m³ of pure solids are deposited every year in each of the ten storage tanks, which each hold 20,000 m³ of salt. The mixture comprises sodium chloride, sand, which forms during the mining process, anhydrite and gypsum and its high solid content makes it difficult to clean the tanks. Attempts to convey the sludge using conventional centrifugal pumps failed due to poor suction performance. Instead, tankers had to be brought in once a year to suck the residues out of the tanks using a vacuum pump.

However, the search for an alternative proved difficult, due to the unusual medium being conveyed. Because of the corrosiveness of sodium chloride in contact with metal, a number of pump manufacturers only offered models made of special materials, which were resistant but expensive. In the end, this led to the decision being made to use a system where the protection of the pump body relies on a design which is particularly service-friendly, rather than on special materials. Corrosion clusters are only formed in standing water. It is therefore crucial that the pump can be cleaned quickly and easily when it is out of use for a long time. The TORNADO® rotary lobe pump is specially designed to meet this requirement: to clean the system, you just need to remove the housing cover to rinse the inside out with water. This completely removes the salt, so that the device is not attacked. In addition, the pump head and timing gear  are physically separated from one an-other, preventing damage that may be caused by the corrosive medium entering the gearbox.

The rotary lobe pump achieves pumping capacities of up to 1,000 m³/h with a maximum 6 bar pressure and a suction lift of up to 8 mWS. Various designs allow the media being moved  to have low to high viscosity, be thixotropic and dilatant, lubricating or non-lubricating, shear-sensitive, abrasive or – as in this case – highly corrosive. It is even possible to convey fluids with solids up to a grain size of 70 mm. Thanks to these features, the salt mash can also be sucked out with hardly any thinning, and during the process the pumping capacity is constant-ly between 10 and 25 m³/h. This meant it only took five days to empty the tanks in the first test run, with the result that the use of the TORNADO® pump had already paid for itself. 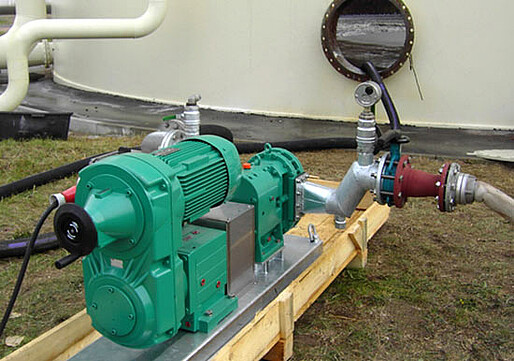